There is Healing and Hope in a Loving, Stable Family A story about brothers moved between five foster homes 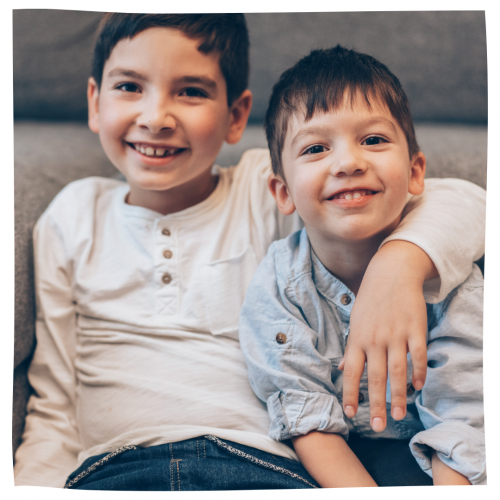 Before being referred to Stanford Sierra Youth & Families, Darren* (age 3) and Kevin* (age 5) had experienced significant trauma and loss. Darren, Kevin, and their older sister were removed from their home due to parental substance abuse and neglect. Child Protective Services placed the children with an aunt. Unfortunately, their aunt was unable to care for or properly supervise them. Late one night, the sister tried to run away and was struck by a car and died. The boys, already traumatized, were devastated.

Darren and Kevin were moved between five foster homes in two years. Though each foster family meant well, they were unfamiliar with childhood trauma and were unable to provide the emotional support the boys needed. Darren and Kevin experienced significant trauma and struggled with grief, anxiety, guilt, and anger. Darren was often afraid that his big brother Kevin would run away, like their sister had. At night, he would wake Kevin up to make sure he hadn’t run away and was still alive. Both brothers also struggled at school and had difficulty making friends.

Eventually the boys were placed with Lynn and Curtis Schaeffer (resource parents), who were determined to learn how to provide the support the boys needed to work through their trauma. All four of them—Darren, Kevin, Lynn, and Curtis—were referred to Stanford Sierra Youth & Families. Stanford Sierra provided them a support team: a social worker, a behavioral therapist, a child-and-family counselor, and a skills trainer. The boys participated in family and individual counseling, while Lynn and Curtis learned about the effects of childhood trauma and how best to support Darren and Kevin.

Working as a group, the boys, the Schaeffers, and their support team identified strengths upon which to build a foundation of trust. The Schaeffers were flexible, open, and willing to try new ideas. Darren and Kevin were loyal, aware, and cared deeply about one another. The more the boys worked through their trauma, the more they understood how it could affect their moods and behavior. This gave them a much-needed sense of control over their lives. At the same time, Lynn and Curtis began to understand and appreciate what an important role their supportive, consistent, loving presence could play in Darren and Kevin’s continued healing and growth.