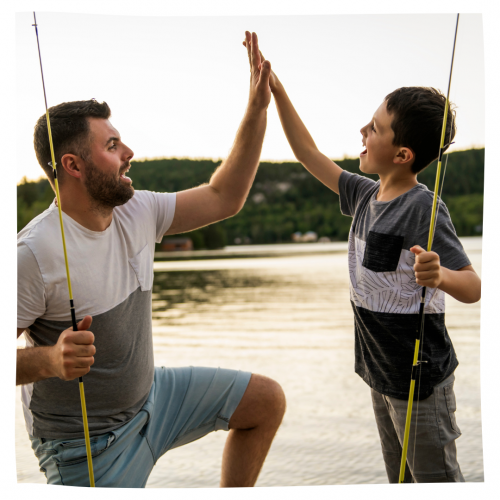 Bryce* is a 15-year-old Explorer in the Wonder Mentoring Program.  He’s been with his mentor, Patrick*, for about two years. Bryce enjoys the time they spend together playing disc golf, talking, or just hanging out.  While Bryce thrives in one-to-one settings, he isn’t as eager to spend time in groups. They can feel overwhelming to him. So when it came time to sign up for Camp Wonder (a summer camp for kids in Wonder), Bryce told Patrick he didn’t want to go.

Patrick asked Bryce to remember the first time they tried playing disc golf.  At first, Bryce had found disc golf to be frustrating and not much fun. But with practice Bryce got really good at it, and now it’s his favorite sport.  Patrick suggested that socializing in groups might be the same way. After some more thought, Bryce decided to give Camp Wonder a try.

At camp, Bryce enjoyed hiking, fishing, and stargazing. On the treasure hunt, he teamed up with some other Explorers. Afterwards, they went swimming together. Bryce eventually got involved in the larger group activities too.  He designed a flag with his cabin mates and participated in the talent show. By the end of camp, Bryce had decided he wanted to join Wonder’s Leaders in Training (LIT).  LITs are older Explorers in Wonder who take on leadership responsibilities. They help plan and run camp each year.  They plan other group activities throughout the year too, like field trips to museums and amusement parks.

Wonder mentors help foster youth like Bryce experience relationships as a source of joy, meaning, and support. Through the bonds of trust and shared experience, a young person in Wonder grows socially and emotionally as they engage the world around them in positive ways.