Mitchell, James, and their new baby sister Their family is defined by love not DNA. 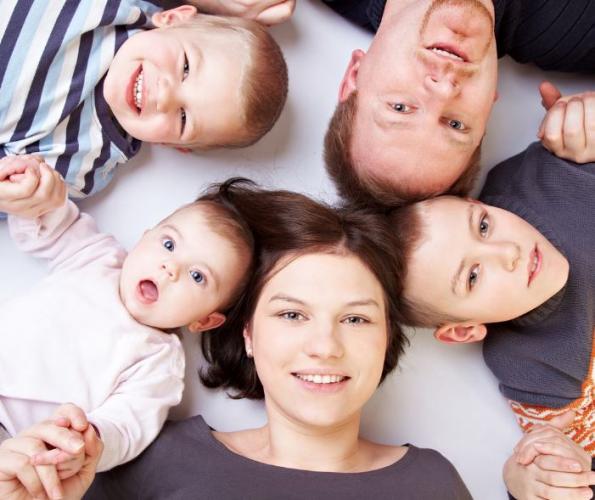 Brothers, Mitchell* (age 6) and James* (age 2) entered foster care with significant trauma. Mitchell had severe language delay. Both had difficulty sleeping at night. Paul* and Nichole* wanted to have children but were unable to conceive, so they explored adoption. When some friends from church shared their experience of adopting through local foster care, Paul and Nichole attended an orientation at Stanford Sierra Youth & Families (SSYF). At the orientation, they learned of the many children living in foster care right in their community. Excited about the idea of providing a stable home and loving family to a local child, they began the process to become a resource family and were approved.

Mitchell and James were placed with Paul and Nichole, who slowly began to earn the boys’ trust. An SSYF therapist worked with the brothers to help them process and heal from their trauma, and with Nichole and Paul’s support, they began to feel safe. SSYF was also able to keep the boys in contact with their biological extended family, especially their grandmother who was very important to them. Mitchell and James also worried about their biological parents, who struggled with drug abuse and mental health issues. As the boys worked through their feelings in therapy, Paul and Nichole incorporated prayer into their nightly ritual, so the brothers could care for their birth parents in a safe, supportive environment. With continued support from a team of SSYF social workers and therapists, Mitchell, James, Paul, and Nichole became a permanent family less than a year after the boys moved in. The boys are now thriving with the nurturing care and support of their forever family.

A year after the adoption was finalized, the family decided to open their hearts and home to another local child. Soon, a baby girl was born at a nearby hospital with drugs in her system from her biological mother’s substance abuse. As a result, the baby girl required special medical care. Nichole, Paul, James, and Mitchell welcomed the baby girl into their lives. The family stayed connected to the girl’s birth mother, in case a reunification was possible. The birth mother tried to recover from her substance abuse disorder, but was unable to do so. In an act of selflessness, she reached out to Nichole and Paul to say that, although it pained her to admit, she knew her daughter was better off with them, that they were the only family the little girl had ever known.

Today, Mitchell, James, and their little sister know that they are loved and safe—and that their parents, Nichole and Paul, support their connections with their biological families too.

*Names and other identifying details have been changed to protect the identity of the youth.